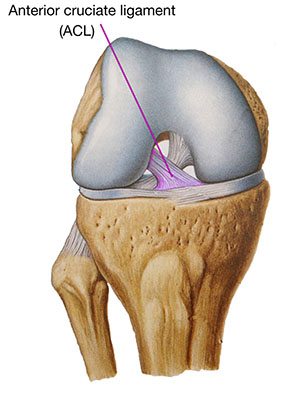 If you decide to go for the surgical approach to recovering from your ACL injury there are some different options to consider: autograft, allograft or synthetic.

An auto graft is replacement tissue from your own body.  In terms of an ACL autograft options include the patellar tendon, the hamstring tendon and the lesser used quads tendon.  Autografts can also be donated from another person, generally a family member.

It was back in the 1960’s that the first use of the bone-patella-tendon-bone graft (PT) was used for reconstructing the ACL.  This involves harvesting the middle third of the patella tendon, with an attached piece of bone at either end. It was initially thought that PT graft provided great strength and was easy to use. However, with further use it was noted that the PT graft had some complications.  There were high rates of anterior knee pain, pain on kneeling, loss of skin sensation and skin scarring due to the incision.

HT grafts are now the most common type of graft to use for ACL reconstruction.  They appear to be superior in preventing anterior knee pain & pain on kneeling, and with new techniques HT grafts are strong in providing stability to the knee.

An allograft is donor tissue from a cadaver (deceased person).  Allografts are usually used for revision ACL surgeries, when a previous graft has failed, or for those that do not require high demand stability.  The most commonly used allografts include achilles tendon, anterior tibilais tendon from the ankle, or patellar tendon from the knee.

The disadvantages of allografts include increased risk of viral infection (although this has greatly improved with better sterilization techniques), tissue rejection and delayed healing time. The advantages of an allograft include quicker surgery, no rehabilitation to the donor site and no weakening of the donor area causing secondary injury.  Allografts, however, have a high failure rate in the young active population.

Allografts therefore, may be a good choice for the less active (no change of direction or high impact activities) or in complicated cases failing previous reconstructive surgery, but are not generally the first choice graft for active individuals.

The 1980’s were a time of experimentation for ACL reconstruction.  The idea was to limit donor site morbidity and to make surgery easier. Allografts were an obvious answer to this but brought their own complications.

What about a synthetic ligament? that would mean no donor, no donor site and an easy insertion. Grafts made from Gore-Tex, carbon fibre and polyester initially had good results, with very good strength but later follow up results showed high failure rates and bits of the graft actually floating into your body system.

The most encouraging synthetic graft has been the LARS (Ligament advanced reinforcement system). LARS is a non-absorbable synthetic ligament that allows the original ACL to heal around it (2).  This enables a quicker return to sport and function.  Early results have been promising, but given it is a new technique long term results are awaited.

Nick Malceski of the Sydney Swans AFL team was the first AFL player to undergo LARS reconstruction in 2008, the third in his career.  Malceski missed just 8 weeks of footy.  Surgeons performing LARS surgery are aware of the re-rupture rate but “just hope” that the failure happens far enough down the track that players have finished their careers.

SPEAK WITH ONE OF OUR PHYSIOS

GET STARTED WITH A FREE PHONE CONSULTATION